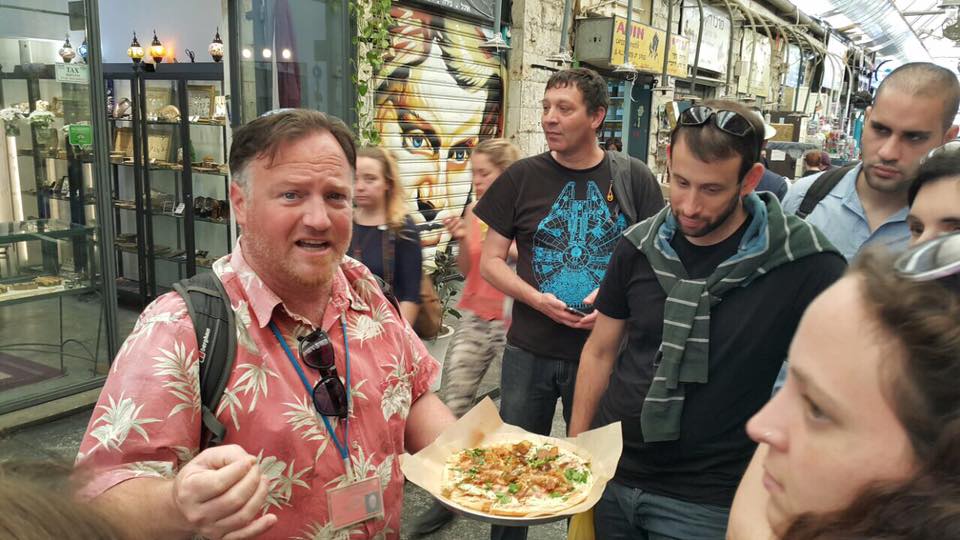 Over the years, I've been featured in many articles, as well as appearing on TV, videos and radio programs. I've also published a number of articles of my own.

Enjoy these, and see a little more what I'm all about!

Some pieces in which I was interviewed, or was the "star of the show."

Haaretz
A current article about me and some other guides who are bringing our tours online during the Coronavirus crisis.

Cruising Israel - ILTV
A segment in Machane Yehuda that runs for about 10 minutes. I'm featured starting around 18:53.
Next, I was featured in the lead story of a second episode, ending at 11:43 of this video:

Nehemiah's Wall
Featured on this podcast, discussing Biblical sites throughout the land of Israel.

Jewish Journal (Los Angeles)
A profile piece about me and my Israel tour business.

Magellan magazine
My first real coverage in Spanish, which I don't speak! (I guided in English, but this was written "en español," so I can only assume that it says good things about my tour in City of David.)

TimeOut Israel
Included in a listing of the best culinary tours and activities in Israel.

Thomas Cook
A great short video as part of a campaign promoting Jerusalem as a tour destination.

Extra Crispy - MyRecipes.com
“This Yemeni-Jewish Pastry Isn’t As Delicate As It Looks”

Mom Who Runs
A review of my shuk tour

The New York Jewish Week
"A Taste of Jerusalem"

From the Grapevine
About fresh, seasonal produce

Project Seventy
Part of a cool campaign of 70 videos shot all over Israel in honor of Israel's 70th anniversary:

Marni Landes DeWitt
A friend's video from before I became a guide, where I brought her to see one of my favorite local bread bakeries:

Ta'am - Judaism on a Plate
A couple of short videos with me, via this awesome project connecting Jewish food and culture.
"Always Something New to Taste" and "Happy Hour in Jerusalem"

Hatch Brewery
A two part "Shuk Facts" video with my friends from the awesome Hatch Brew Pub in Machane Yehuda.
PART ONE and PART TWO.

A few pieces I've written that connect with Jerusalem, the shuk or Jewish Food in general.

Jerusalem Post
For Passover 2020, about sites in the Negev connected with modern Israeli history: "Create Your Own Exodus in the Negev Desert"
A piece about the challenges of real estate development in Jerusalem: "Pigs Must Be Flying"
This is an argument in favor of running the light rail along Emek Refaim Street. It takes Jerusalem's history into account. "Triple Benefit"