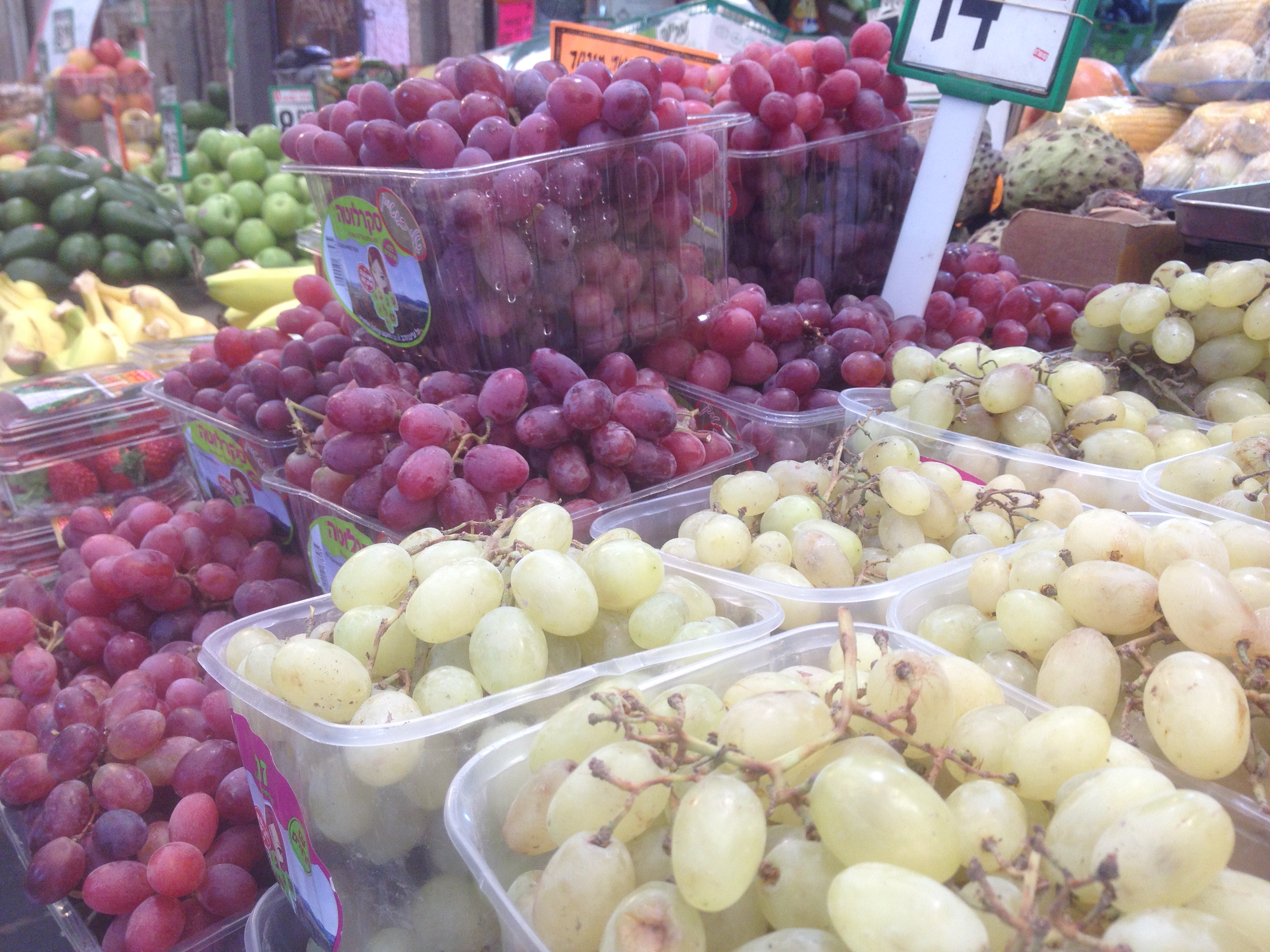 Now that you’ve all seen my map of every shop in Machane Yehuda Market, it is time for me to use that map to highlight all of the wonderful, the surprising, the delicious and the downright strange things that you can find in the shuk. Some of these are in response to requests I got for where certain things can be found. Others are things that I know are important, based on the number of times I have guided tours through the market. And some of them are simply my personal favorites, on a non-scientific level!

For starters, let me say that in my opinion, anyone who tells you they know the best place to find anything, is full of… last week’s leftover Machane Yehuda produce! People love to claim that they know the best chummus, fish store, falafel or butcher. As if there were some kind of objective “best.” Sorry folks, their ain’t. What I will tell you in this post is which places are some of my faves, from a purely subjective angle. Sometimes I think the quality is the best. Other times a stand has the best prices or selection. And sometimes, I prefer one place simply because the proprietors are nice people.

You don’t have to agree with me. I’m very opinionated, but that comes with the shuk being my “second home.” But I encourage you to wander around, try many places, and form your own opinions!

All places listed below refer to section numbers on the map I posted last week (and linked to above).

Where Can I Find…

…the Public Restrooms?
This is always an important one. And interestingly, the very first public restrooms in the city were located in the shuk! When the Savings and Loan Market section was built, they set aside one of the stores to be a public toilet. I am not certain if it is the same one as can be found today in section 8, at the southwest side of Etz Chaim Street, but it could be.

There are men’s and women’s restrooms scattered in a few places throughout the shuk, and they are not always next to each other. Men’s can be found in 8, 11 and 13. Women’s in 11 and 18.

…the Best Produce?
The truth is, this is a tough one. There are so many produce stands, how do you choose which to go to? Well, for starters, you can just walk around and see what looks good in general. Some places will let you take a taste of some things as well. And some stands specialize in certain types of produce. I’ll highlight a few here.

In general, the Iraqi Shuk (9) is great for greens of all kinds. There is one store on Etz Chaim (5) that is much larger, and thus has a good selection. Two stores that are both fairly small, but often have things that you don’t find at other stands can be found near each other, one on HaCharuv (19), about halfway down on the west side, the other on HaShaked (18), just east of David Dagim fish store. One store in the middle of Etz Chaim (6) has a wider selection of mushrooms. And if you are looking for cheap, but lower quality (perhaps a day or two older?) produce, check out the store on Machane Yehuda, just south of HaEshkol and Ugat Chen (3).

…Organic Produce?
As far as I can tell, there is not a whole lot of organic produce for sale in the shuk. One place I have found, however, is just outside the shuk on Beit Yaakov Street. Hadassa Health Food store gets organic produce on Mondays and Thursdays. The other is in the large produce store I mentioned on Etz Chaim (5), towards the front of the store facing the registers. It is a small selection, but at least they have some.

…the Best Falafel?
Also not in the shuk itself, but my favorite falafel in Jerusalem is located just off the map. So even though it might not fully belong in this post, I’m including it anyway! (And if you want to check it out, I previously rated various shwarma joints throughout Jerusalem, including some around the shuk.) Off the bottom left side of the map, at the corner of Agrippas and Beit Yaakov, you can find Falafel Mula. Delicious, crispy and (believe it or not) gluten free. Not, not the pita bread. But the falafel itself (which most people prepare using some flour in the mixture). And speaking of which…

…Gluten-Free Products?
The Natural Choice Bakery on Agrippas (25) has some Gluten-Free baked goods. But there is also a Gluten-Free Store on Agrippas, off the map to the west, towards Beit Yaakov.

…the Best Fish?
There are lots of fishmongers around. I’ll admit that I haven’t tried them all. But that’s because everyone sent me to one when I first made aliyah. And after going there I found them to be clean, have high quality fish at decent (though not cheap) prices, offer good and friendly service and feature a nice selection. So I never looked anywhere else!

David Dagim is located on HaShaked (18) right where it meets HaEgoz, and last year they opened an auxiliary “express” branch on Agrippas (25). They have a selection of both fresh and frozen fish.

…the Best Meat?
Over the years, I’ve gone to a few more butchers than fishmongers in the shuk. One of the better ones in terms of both quality and cleanliness is on HaCharuv (19) near the nice produce stand I mentioned. Another one I like, particularly for the chickens, is on Etz Chaim close to Yaffo (5).

…the Best Spices?
Truth be told, I don’t think there is really a big difference between the different spice stores. So for me, my favorite is based on the atmosphere in the store, and the fact that the owner/staff are nice people. Olam HaTavlinim v’HaKafeh (World of Spices and Coffee) is on Yaffo, between the open and covered markets (12).

Also, I’ve learned that there is a slight difference in selection between some of the stores. For example, I was interested in making a Persian dish, and was looking for barberries (also called zereshk), and all of the stores I looked in kept telling me to “go to the Persians.” But none could tell me where “the Persians” were. I found two stores that carry zereshk: Pitzuchei Dani (5) and one on HaAfarsek (16). Both are more nut and dried fruit stores (called pitzuchim in Hebrew), but they sell some spices too.

And on that note, I can’t really tell the difference between all of the different pitzuchim shops, labeled as “nuts+” on my map.

…the Police?
I hope you have no need for them, but just in case you do, you should know that there is a police station in the shuk itself. Though I bet 99% of the people who go to the shuk had no idea!

They are actually located one floor above street level, overlooking Machane Yehuda Street, but the entrance is from inside of the cross street in the Iraqi Shuk (10).

Where Should I Eat?

About 15 years ago, the only places you could eat in the shuk were the “workers’ restaurants” located around the edges of the market. But in 2002, Cafe Mizrachi (17) opened as the first cafe/restaurant inside the shuk itself. People thought they were crazy at first, but the idea caught on, and now there are around 30 eateries in the market itself, not to mention countless others nearby. You can find a good list in the categories section of my shuk map.

But one of the things I find coolest about the eateries in the shuk is the diversity of the cuisines. It is this very blend that really defines Israeli cuisine in general, and Jerusalemite cuisine in particular. So I want to highlight a few of my favorites here, tell you the origin of the food, and give you their locations. And since most are kosher, I specify meat, dairy or parve. This is not saying the others are bad — in fact I enjoy eating at most of the places in the shuk at times. These are just some of the special ones for me.

And How About a Drink?

The most recent change in the continual development of Machane Yehuda is that there are now a number of bars that have opened in the shuk. As the changes in the shuk always mimic the changes taking place in the city, this most recent change reflects a focus on youth culture that our current mayor, Nir Barkat, has brought to Jerusalem. So whereas a mere 5 years ago, or so, the shuk was completely silent, closed and abandoned at night, now it is teeming with people into the wee hours of the morning. This has also led to the eateries staying open later into the night as well.

There are currently 6 or 7 bars in the shuk itself (depending how you define a bar), plus many more nearby. The first to open was 5th of May (8), and it remains quite popular. One of the larger and better known ones is Casino de Paris (13), partially gaining its fame from co-owners Eli Mizrachi (of Cafe Mizrachi fame) and Israeli rock star Shaanan Streett (of Hadag Nachash). My personal favorite is Que Pasa (21), because they have my favorite Israeli craft beer available on tap. Also interesting is Tahrir (16) which bills itself as an “Israeli Culture Bar.” They have live music frequently, and tap into a more heavily native Israeli vibe.

With the growing diversity of stores in the market, there are a few stores that many people don’t even know about, and that you might find surprising.

For example, one of the more surprising things is right opposite the Que Pasa bar: a synagogue (21)! In the 1980s, a store owner named Zevulun Amdadi passed away and left his shop to be converted into the “Beit Zvul” synagogue. It is open during the day and has regular services for the shop workers who are religious.

* * *
In conjunction with the map, and my previous post in this series, I hope this really helps you find what you are looking for in the market. But the truth remains: the best way to get to know Machane Yehuda is just to wander around with eyes wide open!

But if you want a more directed visit, I’d love to guide you there and put things in context. If you’re interested, please get in touch!

Thanks to all who spread the map around and shared with friends. If you have any more questions about the shuk (such as where to find something specific), please send me an email or leave a comment below!