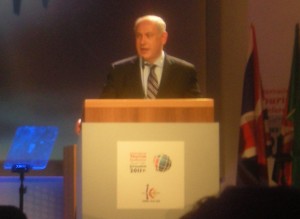 This week I am attending the first International Tourism Conference being held in Jerusalem’s Binyanei HaUmah Convention Center. Focusing both on the changing opportunities and challenges in the global tourism industry, as well as on the unique attractions of Israel (and Jerusalem in particular) as a tourist destination, the conference has drawn hundreds of participants from around the world.

With panels on topics such as “The Role of Media in Generating Tourism,” “The Impact of Technology on the Tourism Industry,” and “Branding Cities,” the conference features politicians such as Prime Minister Binyamin Netanyahu, Minister of Tourism Stas Misezhnikov and Jerusalem Mayor Nir Barkat alongside media personality Chris Matthews (“Hardball with Chris Matthews”), MTV International founder Bill Roedy and museum directors from around the world.