All You Want to Know About Machane Yehuda – Part 4: Making Improvements 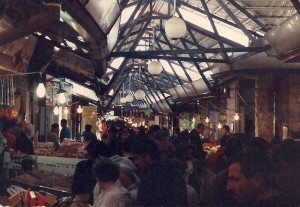 The new roofs over the shuk in March 1990

Nowadays, almost the entire shuk is covered by roofing, except the wide open street of Machane Yehuda, the Shuk HaGruzini and the courtyard off of the Iraqi Shuk that holds Azura Restaurant, a backgammon club and public bathrooms. (I will tell you where all the public bathrooms are in a future post as well.) Over the years before the official roofing, shop owners put up makeshift, ramshackle tin covers. The first street to receive public roofing was HaTapuach Street, in 1978. It was not, however, the same style of roofing that we have today. Rather, the street was covered tightly in a solid, gabled roof.