A Tour of Wineries in Eretz Binyamin / Samaria 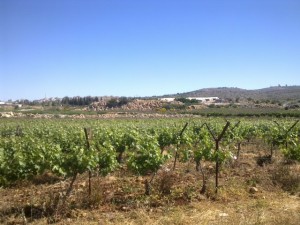 The vineyards of Tanya Winery in Ofra

Last week I had the pleasure of visiting five different wineries with some other tour guides and friends. The wineries were all located in the region of Eretz Binyamin — the area that was designated in the Bible for the tribe of Benjamin. Today it is part of the region known as Samaria, and there are at least 7 or 8 wineries in this small part of the hill country, a mere 25 miles or so apart. But before I get into the wineries themselves, I want to talk briefly about Israeli wines overall.

I love the story of the wine industry in Israel. Clearly one of the oldest and most famous industries in the land, winemaking was always an important identifying feature of Israel. Images, for example, of the spies sent by Moses to explore the land of Canaan, and their reports of giant grape clusters spring to mind. In fact, that very image is the logo of both Israel’s Ministry of Tourism and the largest wine producer in the country — Carmel Wineries.

However, with the arrival of Muslim rule, which lasted for about 1100 of the 1300 years prior to the 20th Century, Israeli wines virtually disappeared. Since Muslims are prohibited from drinking wine, virtually all Israeli wine production ceased, with perhaps a minor resurgence during the 200-year period of Crusader rule in the land (1099-1291, with periods of Muslim rule inside that time frame as well).

END_OF_DOCUMENT_TOKEN_TO_BE_REPLACED 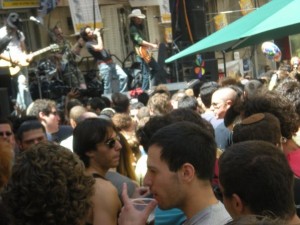 A band playing at one of Jerusalem's Friday afternoon summer street parties.

For the first three entries in this post: Jerusalem Top 10 – Part 1

Jerusalem has a thriving cultural scene, full of great music, art and crafts. And especially through the summer season (which really lasts about half the year here), there are tons of festivals that can satisfy myriad interests.

END_OF_DOCUMENT_TOKEN_TO_BE_REPLACED 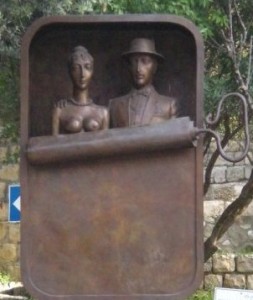 And now for something somewhat different...

Well, I suppose last week’s photo was more challenging. Only people from my class who were there with me recognized where the photo was taken. But that’s not all that surprising, considering that it is not a popular spot on the typical tourist trail.

As those who got it correct guessed, the photo was taken at the Mony Winery cellars, near Beit Shemesh. (There was one guess that said Mony Wineries, but gave the wrong location for it — half a point!) I’ll tell you a bit more about the winery and the cellars in a bit, but first I wanted to discuss this week’s photo. I decided to choose something from a place that my tour guide course did not visit, so that my classmates don’t have the edge in this one. That being said, however, it is a site that I really enjoy, and hope to take tourists to in the future.

END_OF_DOCUMENT_TOKEN_TO_BE_REPLACED 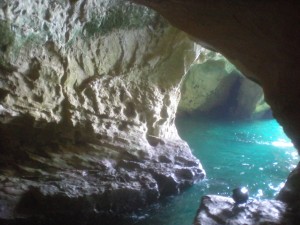 Inside one of the natural grottoes at Rosh Hanikra

In my last post of a few weeks ago, I asked for some advice in helping my friend Lara to plan a great itinerary for her first trip to Israel. Many of you here, and on my Facebook, made wonderful suggestions of things to do, places to go, and even food to eat. In total, Lara was here for 16 days, and I spent a large portion of that time with her. Your collective assistance was a great help, and I wanted to share with you the bulk of her trip, so you can see the kind of balance we included.

END_OF_DOCUMENT_TOKEN_TO_BE_REPLACED 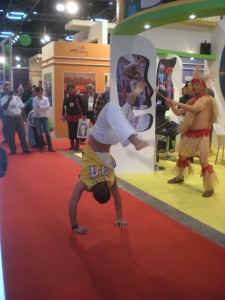 Brazilian capoeira and samba at IMTM to promote travel there.

Ever been to a trade show of any kind? Auto show, food industry convention, hotel and hospitality conference or energy industry gathering? Well, the International Mediterranean Tourism Market (IMTM) is a fairly standard example of this type of event.

I say this only because I wasn’t sure exactly what to expect before I attended it last Wednesday. I mean, I knew it would be a trade show, but I’d never been to one in Israel before. Plus, with a name like that, I wasn’t sure how much would be related to Israel travel in particular and how much would be geared towards tourism to other countries in the region. I also had no idea how relevant it would be for me, as a specifically Israeli tourguide-to-be.

END_OF_DOCUMENT_TOKEN_TO_BE_REPLACED 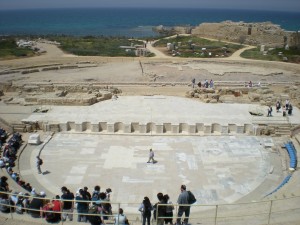 A tour group at the theater in Caesarea, Mediterranean in the background.

Finding a bit more time now, so hope to post some tour updates and more news stories soon. But just a quick summary for now. Tours that I’ve taken but not yet written about: Ein Gedi, southern Dead Sea area (Mt. Sodom), Modiin vicinity (Tel Gezer and stuff related to the Maccabees) and Sharon/southern Carmel region (Apollonia, Dor and Atlit).

And some of the class subjects I may want to discuss here: Geography and Geology of Israel (and how they relate to each other) and fauna. But first…